Yesterday, I visited my 94 year old grandfather, Milton Williams in Oakland, California. He told me that although he was 6 years old when his mother died, he remembered certain details about the funeral.  He remembered asking family members why they were crying.  He then said “I even remember the church where her funeral occurred.  It was on 9th & Chester and it was an AME church…’Chapel…’ something.”  I Googled “9th and Chester AME Church” on my phone and the following URL appeared in the search results: http://www.parkschapelame.org/about-us.html.

I asked him, “Was it Parks Chapel AME Church?”

From my phone, I showed him the following newspaper article:

He couldn’t believe it!

He then suggested that I look for his mother’s death notice in the Oakland Tribune which I never thought to pursue because I already obtained her death certificate from the Alameda County Clerk-Recorder’s Office.  Florence Hamilton Williams died January 25, 1927 in Oakland, California. Previously, I did search for her name on GenealogyBank.com and Newspapers.com, but for months, I came up empty-handed.  HE WAS ADAMANT there had to be a death notice because he said his family was “very big on publishing things like that in the paper.”

His passion about it motivated me to search tonight, but just when I was about to give up (since I’d been down this road before), I changed my search criteria to HIS NAME and it appeared at the top of the search results on Newspapers.com.  I called him immediately! 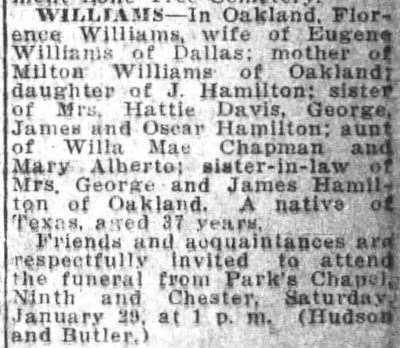 At 94 years old, my grandfather’s mind never ceases to amaze me!  He remembers so much in great detail.

What’s most amazing to me is now, I have a location for his father’s origins!  All my grandfather knew about his father was that he “was from Texas.”  He was told his parents separated shortly before her death and that his father moved backed to Texas.  When he received word his wife died, he sent letters and clothes to his son, but he died a year or two later.  He was never told anything else about his father.  With so little information, I’ve searched for his father the last two years with no good fortune, but now, I at least know he was from Dallas, Texas!