This DNA discovery may be my most significant genealogical find to date.

Three years ago my 92 year old maternal grandfather, Milton Williams asked me if I would help him find out about his paternal ancestry. I gave him my word that I would do everything in my power to do so. I knew it would be an extremely difficult and challenging project because 1) my grandfather’s advanced age made this a time sensitive task, and 2) my grandfather’s mother, Florence (Hamilton) Williams, died when he was 6 years old and his father, Eugene, died a year later.  He was raised primarily by his mother’s side of the family and they never told him anything about his father or his father’s family. Maybe they knew something about his family, maybe they didn’t–that’s something I’ll never know, but with little information to begin with, I had major doubts I could grant his wish.

Here were the alleged facts as I knew them:

My first inclination was to search Texas State Death Records and the death indexes for Eugene Williams. Based on several conversations with Milton, Eugene would have died between 1927-1930. I searched the database with no success.  I didn’t know what cities in Texas he lived or died and search results for any “Eugene Williams” born around 1874 were widely variable.  I didn’t know who his parents were, if he had other children or siblings.  It started to feel like a lost cause.

Between the Fall of 2014 and the Winter of 2015, I submitted my grandfather’s DNA sample for all three major DNA testing companies: 23andme, AncestryDNA (offered by Ancestry) and Family Tree DNA aka FTDNA. Although Milton is of African descent, Milton’s results on 23andme showed MANY matches with people of European descent with KENTUCKY listed as a place of origin. Additionally, Milton’s paternal haplogroup (a genetic population of people who share a common ancestor on the patrilineal line) is I-M26 (formerly I2a1*).   This is a Eastern & Southern European haplogroup which indicates he descends from a European male in his paternal lineage.

In November of 2015, I began communicating with one of Milton’s 23andme DNA Relatives, a male of European descent named Jamie Painter who shared 0.89% of DNA with Milton.  Based on 23andme’s chart below that summarizes the average percent of DNA shared among relatives, Jamie’s predicted relationship to Milton’s landed in a range between 2nd cousin, one removed and 3rd cousin level. This means that the common ancestors between Milton and Jamie are between great grandparent and 2nd great grandparents.

Jamie and I began sharing family tree information.  I studied his family tree for months trying to find commonalities.  I felt like I was looking for a needle in a haystack!  I started comparing other DNA relatives who shared triangulated strands of DNA with Jamie & Milton, but we could not identify any common ancestors.  Of the many matches my grandfather had that were clearly on his mother’s side, I noticed Jamie was not related to any of them or their common matches so my strong suspicion was that he was a relative on Milton’s paternal line.  At the time, that was all I could deduce so I put that research effort on hold for a while.

Learning that Milton’s paternal haplogroup was of European descent lead me to utilize FTDNA’s Y-DNA test for more details.  The Y-DNA analyzes the DNA in the Y-chromosome.  Fathers pass down copies of their Y-chromosome relatively unchanged for many generations.  Over thousands of years, there will be intermittent variations that will uniquely identify descendants of a common male ancestor by those variant.  Thus, my hope was to find individuals who have the same Y-chromosome that were within the last 6-10 generations to help me narrow down the possible European male ancestors.  Milton’s results were stunning because he did not descend from a line of males named “Williams.”  As a matter of fact, none of his matches even carried the name “Williams.”  Several of them carried the surname “FLOURNOY” and they descended from European French males named “Flournoy.”  His Paternal Haplogroup by FTDNA’s algorithm is I-P37–again, a Southern European Haplogroup.

The Flournoy surname was not foreign to me.  I remembered seeing that name on Jamie’s tree.  When I reviewed his tree, I discovered Jamie’s 2nd great grandparents were William Cabell FLOURNOY and Martha Watkins Venable.  His great grandmother was their daughter, Sarah Venable FLOURNOY who married the Rev. Joseph PAINTER.  Their third child, Graham Crockett Painter, was Jamie’s paternal grandfather.
When I received the FTDNA results in May of 2016, I called Jamie immediately and we began discussing the likelihood that the common ancestors, which we already knew were within the range of great-grandparents and 2nd great grandparents, were William Cabell Flournoy and Martha Watkins Venable.  Additionally, Milton had another DNA match on AncestryDNA who’s profile username was “D.P.”  This person was a male and the grandson of George PAINTER, Sr., Graham Crockett Painter’s brother.  That meant that “D.P.” and Jamie shared the same great-grandparents (William & Martha), thus, they were 2nd cousins.  Jamie knew of “D.P.” and sadly conveyed that he had passed away this past September. Yet, this was confirmation that William & Martha were undoubtedly common ancestors of both Milton and Jamie.
Lastly, I compared Jamie’s raw data with Milton’s on Gedmatch and the Most Recent Common Ancestor (MCRA) was determined to be 3.8 generations ago. That narrows Milton’s relationship to Jamie as 2nd cousin, once removed and 2nd cousin to Jamie’s father, Graham Fishburne Painter, which means Graham is in the same generation as Milton from the common ancestors, William and Martha Flournoy, their great-grandparents.
So what else does this new revelation mean?  It says that one of William and Martha Flournoy’s male children was most likely Milton’s paternal grandfather. As I stated earlier, Milton’s father, Eugene, stated on the 1920 Census that his father was from Kentucky. Well, herein lies the challenge because the Flournoys and Venables were deeply rooted in Virginia according to Jamie.  On the other hand, it must be noted that census data was often inaccurate.  Additionally, depending on the nature of the relationship between Eugene and his biological father, if any, he may not have actually known where his father was born. He may have assumed Kentucky if that’s where he was living when Eugene reported the information. Nonetheless, this would require studying the ages, lives and migration patterns of the surviving male Flournoy children to either qualify or disqualify them as a Eugene’s father.
The male children of William & Martha Jamie & I identified to be:
John James Flournoy (b. 1837 -)
George Mallory Flournoy (b. 1847 -)
Landon Cabell Flournoy (b. 1850 – 1934)
Charles Bruce Flournoy (b. 1854 – 1912)
Examining their birth dates approximated from census data, and assuming each generation spans about 20-25 years, it is plausible for all of these men to have fathered Eugene who was born in 1874, however, the only son with documented evidence of migrating to Kentucky (and subsequently died there) was Landon Cabell Flournoy who would have been 24 years of age at the time of Eugene’s birth.  I can’t say with 100% certainty, but Jamie and I are of the strong opinion that Landon Cabell Flournoy is Milton’s paternal grandfather.  The pedigree below illustrates the family tree as we believe it to exist. 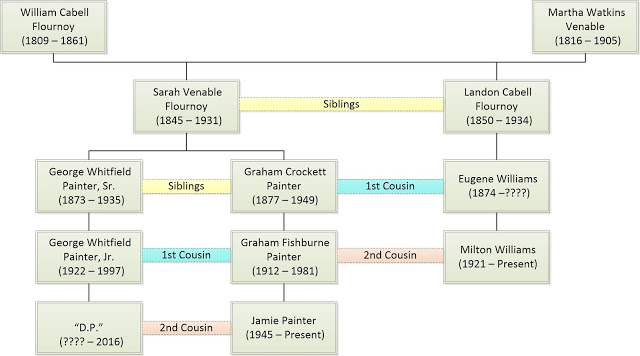 The only item left that would solidify this DNA discovery for me is to find a living male Flournoy that descends from William Cabell Flournoy and have them take a Y-DNA test. A male descendant of Landon would be ideal, but I have yet to identify any living male descendants.
On December 17, 2016, Milton and Jamie were able to communicate for the first time via Skype.  It was a very moving moment for both men. My grandfather was quite emotional because for the first time in his life, he was able to connected with family on his father’s side.  I am so grateful to Jamie for his perseverance and his commitment to the process and I’m grateful to God that a grandson could be a blessing to his grandfather by giving him his heart’s desire.