Skip to content
Ok, this is a story that’s going to make many of my family members’ heads spin, but I’m excited about this post because it is a fun story about the many ties that bind!

Before I get started here’s a brief look at my paternal family tree for the reader’s benefit of understanding this article. 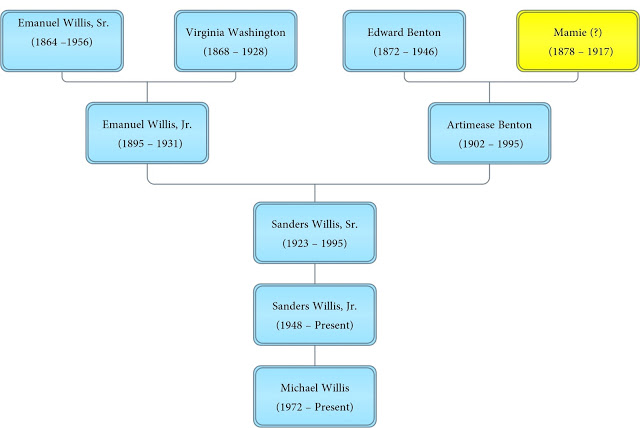 In August of 2015, I wrote a blog about ending my 9 year search for my 2nd great-grandmother’s maiden name, Mamie (Penny) Benton. In the months that followed, I’d spent some time researching her family tree and I came across some possibilities, but I had no direct evidence to support my theories.  Since her death certificate did not have her parents names listed, I tried studying census records looking for families with the surname PENNY living in Gramercy, Louisiana in (St. James Parish) as well as Baton Rouge, Louisiana.

According to her death certificate, Mamie died in Gramercy at the age of 38 in 1917.  My late great aunt, Marguerite (Jackson) Vernell, told me that her mother, my great-grandmother, Artimease Benton, and her siblings, all the children of Mamie Penny and Edward Benton, were born in St. James Parish so I assumed that Mamie’s family was from that parish. Unfortunately, all my search attempts turned up empty so I set my sights on studying Penny families in Baton Rouge.  In addition, I realized I failed to take into account that “Mamie” was potentially a nickname used in place of “Mary.”

That’s when my fortunes changed.

Since Mamie was born around 1878 according to her death certificate, I started looking for “Mary Pennys” born within a five year time frame and I had two hits: One Mary Penny, born in 1876, living in East Baton Rouge Parish on the 1880 US Federal Census and the other was born in April of 1877 living in the same Parish in 1900.  Fortunately, both hits were the same woman in the same households:

– Jack states both parents were born in Missouri

I also tracked this family in 1870 and discovered “Jackson & Maria Penny,” ages 36 and 22 respectively, living in St. James Parish during enumeration.  There were no kids listed. Both were also born in Missouri and Alabama, respectively.  Lastly, I obtained Maria Penny’s death certificate under the name “Mariah” Penny.  It listed her as the widow of Jack Penny. It also stated that she was born in Macon County, Alabama and born to Sam and Della GREEN.  The informant was “Della Harris” who I presumed was her daughter, “Odeal,” but I wasn’t sure.

I had a strong hunch these were the Penny’s I was looking for but without stronger circumstantial evidence I couldn’t draw that conclusion so I shelved this project for a while and move on to other things.

Then, something happened that I never expected…


At the end of 2015, I had a conversation with my cousin, Carol Simmons, about taking a DNA test. I was telling her how awesome and interesting this journey has been tracing ancestry through DNA and so I suggested that she try it. Referring back to my pedigree chart at the top of this post, my great-grandfather was Emanuel Willis, Jr. Carol Simmons is the grandchild of Emanuel’s older sister, Irene (Willis) Simmons. My hope was that Carol’s DNA would add to the growing list of Willis relatives that contributed DNA samples furthering my research on the Willis line.  She contacted me in the summer of 2016 to let me know that she took the test and her results were in.  I couldn’t wait to login and see how she compared with the other Willis relatives, but what I found out was that she not only matched my father, his paternal uncle Edward Willis, myself and cousins who descended from Willis’,  but she also matched my great aunt, Marguerite (Jackson) Vernell. The startling thing about this fact was that Marguerite is my grandfather’s half-sister on their mother’s side.

My great-grandmother, Artimease Benton, married Emanuel Willis and from this union four children were born:

Emanuel died at the age of 28. Some years later, Artimease married her 2nd husband named Will Jackson and from that union, one child was born: my Aunt Marguerite (Jackson) Vernell, therefore, Aunt Marguerite is not a Willis. How in the world could Carol Simmons, a descendant of Willis’ match my Aunt Marguerite who is not the daughter of a Willis?


I called Carol as soon as I became aware of this information and I immediately started asking her questions about other branches of her family tree. I discovered that her mother, Delores (Coates) Simmons was the daughter of a woman whose maiden name was Margareat PENNY. Margareat Penny was the daughter of David Penny, the oldest child of “Mariah” Penny–according to oral family history (as told by Margareat Penny). No one ever mention the name Jack Penny so Carol was unfamiliar with him, but her family was familiar with “Aunt Della Harris” – the same person named “Odeal” on the 1900 census!

As crazy as it sounds, this is how I confirmed my relationship to Jack and Mariah Penny–they were, in fact, my 3rd great-grandparents.


From Slave to Soldier: Jackson Penny

As I continued to research the Penny family, I discovered that Jack Penny served in the Union as a United States Colored Troop (USCT) during the Civil War.  Below is the United States Civil War Widows’ Pension Index Card to pension applications filed between 1861-1934: 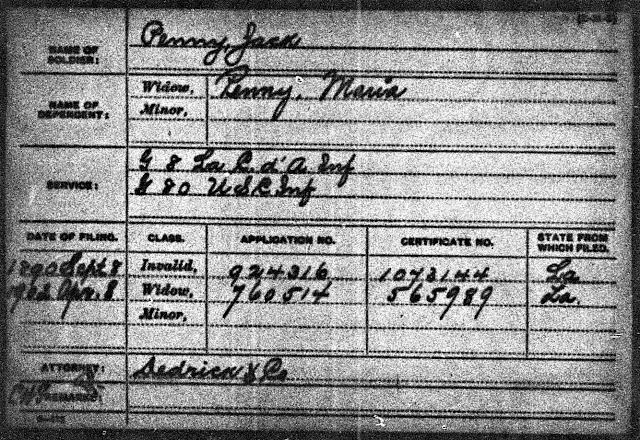 
I ordered the widow’s pension Mariah filed in 1902 after Jack’s death from the National Archives in Washington, DC and discovered a tremendous amount of genealogical information in her file.  In a firsthand account during her deposition, Mariah corroberates the information in her death certificate–that her maiden name is GREEN and that she was born in Macon County, Alabama.  She states her family were the slaves of “Russ Bridges” and that her parents “took her to Texas for safe keeping” when the war broke.  They lived six miles from Marshall, Texas where she was “hired out by a man in Jonesville named ‘Lang’ who was a furniture dealer.”  It was during this time she met Jack Penny on the train going from Jonesville to Marshall, Texas and stated that “he fell in love with me at once, and he began writing to me afterwards, but we got engaged on the train.” They were later married at the home of “Arch Penny,” Jack’s brother who later moves to Champaign, Illinois with his family and takes their mother, Elsie Penny, with them.

When discussing her husband’s life, Mariah states that Jack told her he was born in Cape Girardeau, Missouri and that his family was “owned by a man named ‘Penny’ who raised wheat.  She even states that she owned a picture of him and that his brother, Archie, had the only other known picture of Jack.
November 23, 2016. Carol sent me a copy of a 1995 Penny Family Reunion Program that details the descendants of Mariah Penny.  Nothing is mentioned about Jack and the program is centralized around the descendants of David Penny primarily, which is understandable because Jack died in 1902, his daughter, Mamie, died in 1917 and his wife, Mariah, died two years later.  The oral information gathered came primarily from David’s daughter, Margareat who wasn’t born until 1909.  Several of David’s siblings are missing from this program and it is unclear why this information was lost to their oral history…until now.
Here is an updated pedigree of my paternal grandfather’s ancestry including the Penny Lineage.  Notice the double kinship to Carol on both sides of my grandfather’s family. 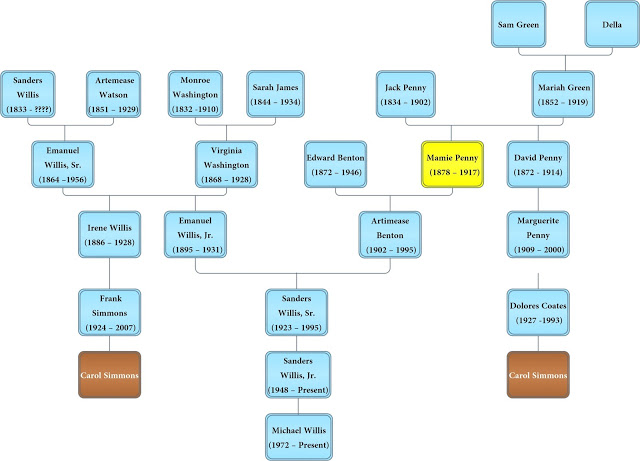 In 2009, just after the birth of my first child, I attended Aunt Marguerite Vernell’s 50th Wedding Anniversary Celebration in Baton Rouge, Louisiana.  Carol and her sisters were in town that weekend for a funeral.  My Aunt Ruth (Willis) Castle, Marguerite’s older sister, reached out to them and invited them to attend the event. Below is a picture of Carol and her sisters with my son at the event…

…and they didn’t know they were related to Marguerite Vernell at that time, nor double-kin to me.  I was able to communicate this new discovery to my Aunt Marguerite before she passed away in October of 2016.  She was not aware of it, but she had a good laugh.

5 thoughts on “Talk About Twists And Turns And Crumbling Brick Walls: DNA Confirms My Penny Lineage”